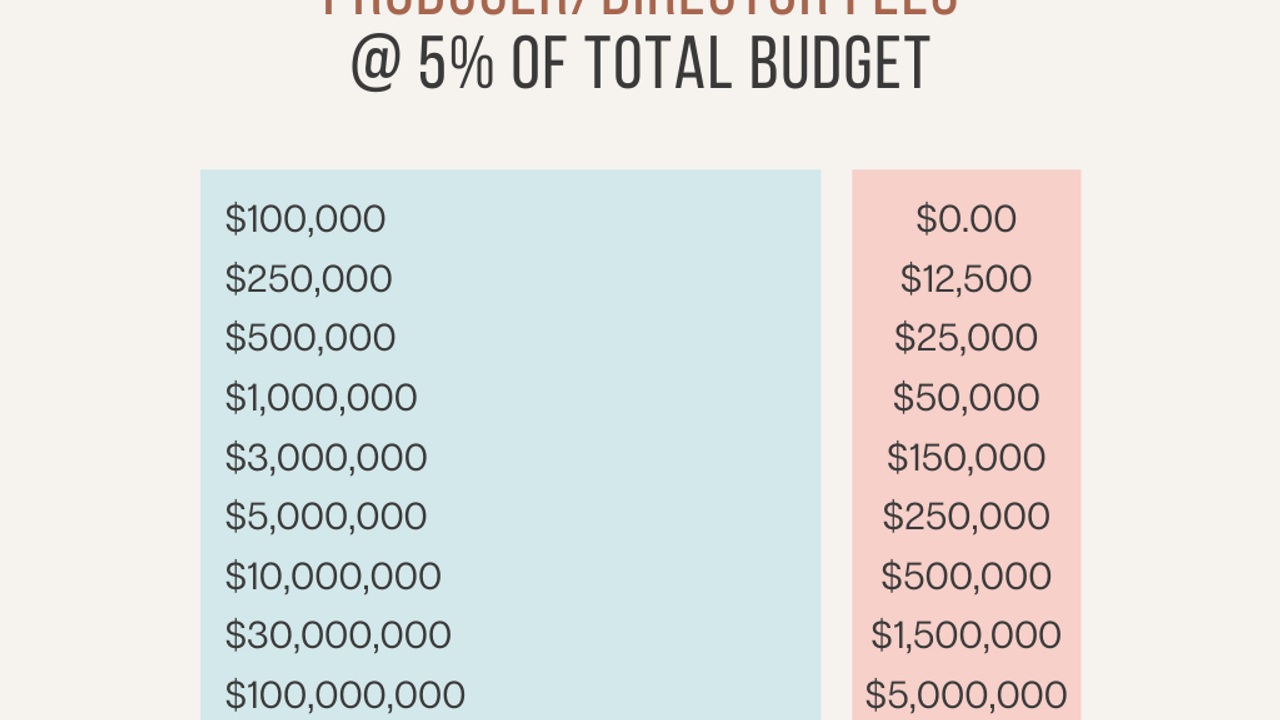 In today's issue, I'm going to take you through the different ways you can make money producing a feature film.

It's important to understand how much income you can expect to generate from each film. By knowing this, you will be able to plan for your time away from other income generating activities. It will also unlock the pathway to turning filmmaking into a full-time endeavour.

Producer/Director fees are your one guaranteed source of income as a filmmaker. So these matter, a lot.

Your fees are proportionate to the budget of your film. A Producer or Director can expect to take home 5-7% of the total budget.

For example, if your budget is $1m, you can expect to take home $50-70k. Not bad, but if it takes you two years to make the film then you're looking at $25-35k per year. Not exactly enough to make it full-time.

Here is a table that shows you some typical budget levels and your expected fees: 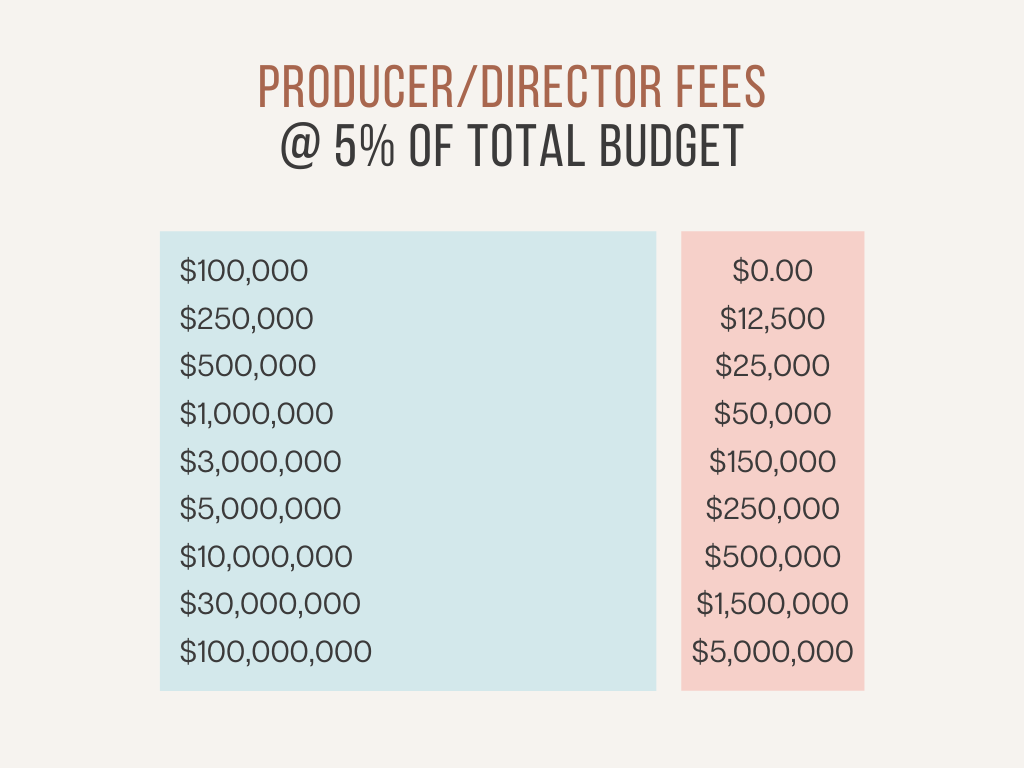 Overheads can be the difference between keeping yourself afloat or going under.

It is standard practice for the production company to charge overheads of 5% of the film's budget.

When you add this 5% to your 5% fee, you can see how on a $1m film you are actually starting to bring in some decent cash.

Note: on low budget films, the producer / director often invest part of their fees to get the finance over the line. So while you might charge 10% of the budget, you might not take it all home.

Margins are the most unknown but vital income a filmmaker can receive. Bear with me while I explain this.

This is vital because you receive those funds months after the film is complete. So it is a much need cash injection that can float you until you finance your next film.

Grants are no-brainers, it's money for jam.

You can usually include more fees in marketing and post-production grants.

In Australia, we have an Export Market Grant. This entitles any Australian exporter to claim 50% of their marketing expenses. And guess who keeps this money? That's right, you the filmmaker.

Now let's look at a hypothetical $1m film and the money you can make: 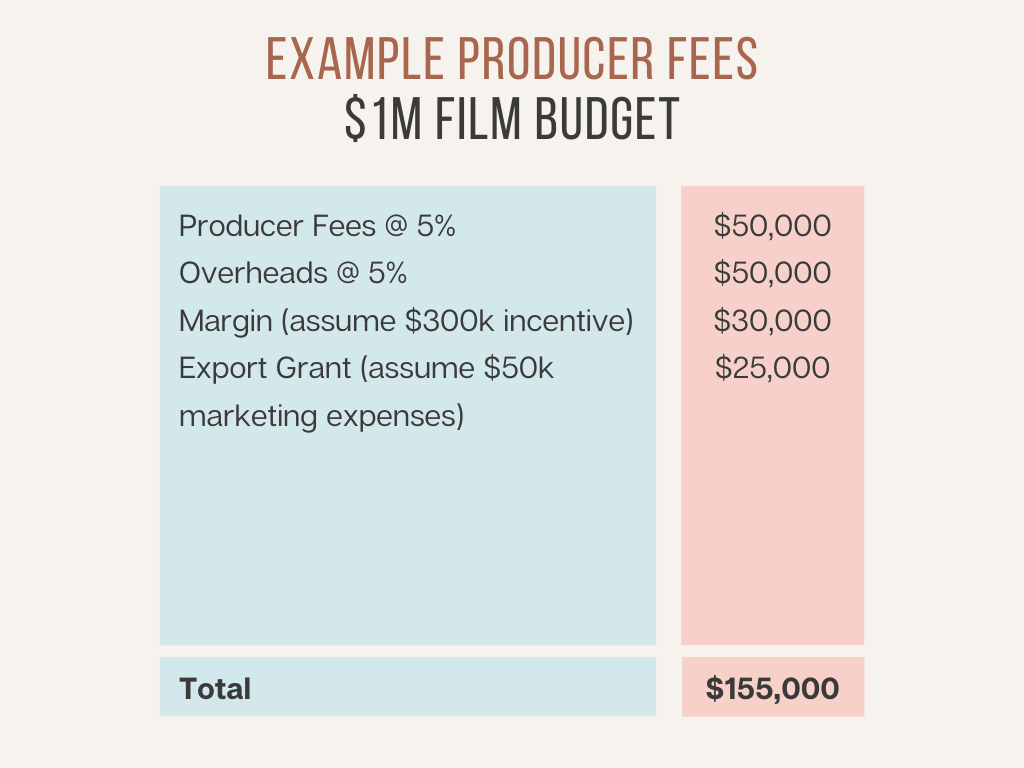 This is the holy grail and will set you up for life.

What do the filmmakers of Saw, Blair Witch and The King's Speech all have in common? It's not that they're Australian.

It's that they are still receiving checks each quarter from those films.

Royalties are the difference between financial freedom and going from film to film. Once you understand this you will start seeing each project through a different lens.

New revenue streams open up when you develop your producing skills.

This is why so many established Producer and Directors executive produce films. It's a way for them to apply their skills to generate fees with a more limited scope of work.

It took me two feature films to develop the skills and confidence to help other filmmakers, and get paid. I charged $1500 to attach a sales agent who was the key to unlocking $3m in producing funding. To say I undercharged is an understatement!

You become valuable to other filmmakers after you produce your debut film. This value increases with each film, as do your fees.

I hope you now have a much clearer picture of how you can make money making films.

Well, that’s it for today.

For more on this topic, head to my Youtube Video.

2. Work 1:1 with me to start raising finance or land distribution (Booked out 1-2 weeks)